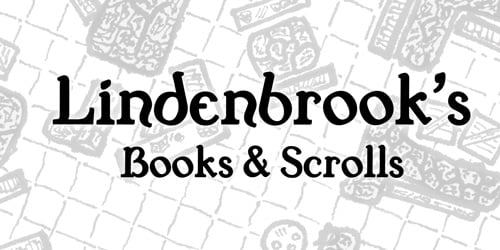 Long before Cora Lindenbrook acquired the deeds to what became her legendary Book & Scroll store, it was the humble abode of the stone half-giant Frumalog.

Everyone in the realm knows of the superb wares of the Lindenbrook store, although that’s at least what Cora the halfling would have you believe.

Rows of heavy old books line most of the stone walls, the shelves bowing under their weight.

As you enter the store, no character can miss the strong smell of old paper, scented candles and herbal tea.

The series of connected stone rooms is lit by delicate candle chandeliers held from the high original wooden beams.

Ms Lindenbrook, who is normally found shifting through her books, is always happy to help out those of the arcane world.

Behind Cora’s desk, where she only sits when dealing with customers, 3 shelves of old scrolls and wizard books stand covered in a thick layer of dust.

Customers are always welcome and often encouraged to browse the shelves.

The most charismatic shoppers receive warming herbal teas if they spend anything more than a couple of minutes in Cora’s presence.

The walls, some at least 10 feet thick, give the Lindenbrook building a very secure and sturdy feeling.

Lindebrook will say its the perfect place to house her expensive, rare and often sought after books & scrolls.

What do people think? I’m still learning many aspects of drawing such images. My previous image was the Iron Hold prison, maybe that’s just over the hill from Cora’s new place?

I like how the walls and shelving don’t align with the natural grid of the floor. However I’m slightly disappointed with the lack of neatness.

I’m sure that’ll come with practise though.